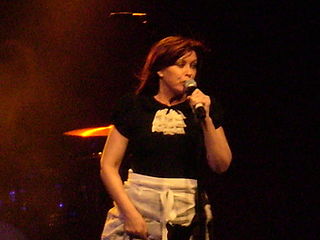 Chrissy Amphlett was born Christine Joy Amphlett on October 25, 1959 in Geelong, Victoria, Australia. During her early years, she traveled all over Europe performing in many bands. She even spent a few months in jail for singing on the street.

﻿She met Mark McEntee in 1980 at the Sydney Opera House. Soon after the Divinyls were formed. They performed live up until 1982 when the recorded soundtracks to be used in the film, Monkey Grip. One of the soundtracks was Chrissy's song, All the Boys in Town. The film was also Chrissy's debut into acting. She also co-starred with then unknown Russell Crowe in the stage musical Blood Brothers in 1988.

She and Mark McEntee, who she also had an affair with, formed the core of the group Divinyls, while other musicians in the band came and went. Between 1982 and 1996, the band released 6 albums. In 1991 they peaked with the release of Chrissy's single, “I Touch Myself”. It was at the top of the charts around the globe – number 1 in Australia, 10 in the UK, and number 4 in the US. Chrissy says this about their music:

In Chrissy Amphlette's own words

"Our music was real, honest, raw and straight from the heart."
Here are a few more of their great hits:Science FictionDon't You Go WalkinElsiePleasure and PainBack To The WallTemperamentalI'm Jealous

It was 6 years before they released the album, Underworld. By then Chrissy was living in New York City working on her autobiography, “Pleasure and Pain: My Life.”

Chrissy was also cast as Judy Garland in the play, The Boy from Oz about the life of Peter Allen. She consistently received standing ovations. The part however, was recast when it hit Broadway in 2003, apparently because Chrissy was Australian. The producers did regret their decision to take her out. She did continue acting the part when the play returned to Australia on tour.

In 1999, she married her husband, Charley Drayton, a US drummer who played in one of the Divinyls albums, as well as in the reformed group. They live in New York City.

On December 7, 2007, Chrissy did an interview on the program, A Current Affair, where she told of her battle with multiple sclerosis. During the show, she also announced that the Divinyls were no more. She had formed a new group in New York. Her revised book, “Pleasure and Pain, added 4 new chapters which tell how she has struggled with the disease over the years.

On October 20, 2010, she revealed that she had breast cancer. She, however, could not undergo radiation therapy because of the MS. With treatment she received in New York, she claims to be cancer free in January of 2011. Her sister is also a breast cancer survivor.

You can find Chrissy's Website here. (Clicking link will open a new window).

Are you looking for something? Use the search box below to help.

Go back to Famous People With MS A-B .