Who is Iman Ali? This beautiful young woman is a 34 year old Pakistani actress and model who also happens to have MS. She was born in Lahore, Punjab, on December 19, 1980 to father, Abid Ali; also a popular television actor, and his first wife, Humaira Ali. She has two sisters, actress and singer Rahma Ali,  and Maryam Ali. She was a young child when her parents divorced and is estranged from her father, who has since remarried.

She began modeling after being discovered by photographer, Shahzad Raza. Popular in India as well as Pakistan, Iman received the Lux Style Award in 2006 for Best Dressed Celebrity, and in 2008 for Best Actress. She co-hosted the show in 2005. She is a much sought after top model and actress today.

Her career began when she appeared as Anarkali for seven minutes in a music video - Ishq Mohabbat Apna Pan - by television and film director, Shoaib Mansoor. She went on to appear in the popular TV series, Kismat. In 2007 she played the role of Maryam in the movie, Khuda Ke Liya, directed by the same man. Since then, she has also appeared in another movie by Mansoor - BOL.

In a 2012 interview about her life and an extended trip to India, she wanted to set the record straight. She'd been accused of trying to further her career in India, when in fact she was going there for alternative treatment of her MS. She speaks openly about the disease whenever she's asked about it, even though it may jeopardize her career as a model and actress.

MS is rare in Pakistan and she hopes to bring awareness of the condition and the many options for treatment. In her words she expresses how she feels about speaking out about MS:

"I’ve been open because people in Pakistan don’t know about MS. I’ve seen a lot of cases where women have not taken it seriously until they’re in a wheel chair and their condition is out of control. It targets mostly women so people find it convenient to ignore.

Awareness has to be created: it was recently discovered that multiple sclerosis is life threatening. I motivated Nadia Khan to do a show on it. I don’t understand why anyone would hide it. Alopathic treatment is unaffordable to most people and I now want to spread awareness about the alternative methods available.

I really want to make some difference and share my experience once I’m back from India where I’ll be gone for around six to seven weeks. Before leaving I want to clarify that I am not going to Bombay to make films; I am going to Dehradun for alternative therapy on MS." 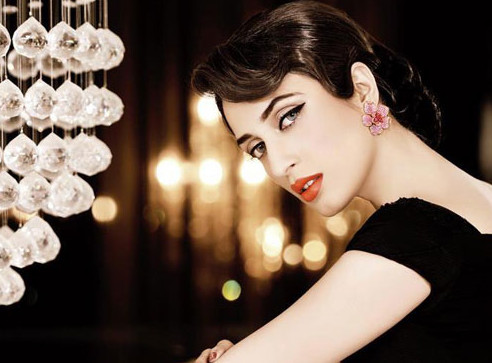 It is a good thing that she wants to bring more awareness to the women of Pakistan, and ultimately, around the world, about this condition, multiple sclerosis. In some places, like the US and UK, treatment is readily available to anyone who has MS. In other places, depending on how well known the disease is, treatments can be limited.

I admire Iman Ali's courage to continue speaking out. Her willingness can encourage others to seek treatment and not remain in the shadows until they have reached a point of no return, so-to-speak. She may also inspire others who have a platform in which to speak out to begin more awareness campaigns.

Go from Iman Ali back to Famous People with Multiple Sclerosis.

Do you know someone who's Famous with Multiple Sclerosis that's not on this list?

Add them to the list! Create your own page!

If you know someone, a local personality, a famous writer, poet, athlete, or musician, who has overcome the effects of MS, we want to know about them.

Tell us a little about them and why they are famous. Add a pic so we'll have a face to go with the name.