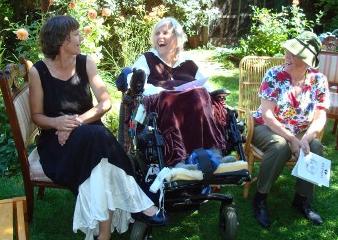 Have you reached Part 2 and would like to go to Diana Neutze - Part 1 first? Then click here.

Question 5: Diana Neutze, what are your thoughts about life now as an aging person with MS?
Answer: I think this question is answered in her post, A Living Will:

"A living will is all right in theory. I don’t want you to intervene to save my life… in five years time, next year, even next month. But how about the day after tomorrow? I had always had a feeling that I would have wanted to retract, but then something happened.

A few weeks ago I had a laryngitic bug which went down into my chest. I don’t often get infections and when I do the M.S. plays up a treat.... All that I could do, was turn my head to left or right against the headrest.... …...The (next day) the doctor came in the evening, tested my lungs and found the infection had got down to my trachea but not as far as the lungs. Because of the living will, he asked me what we should do. …...I said to him that a carer from seven years back was on her way to New Zealand from England and I didn’t want to die without seeing her, that a dear friend had just had a tragic loss and I didn’t want her to have any more grief at that time, but he said I needed to consider me. But my will to live had been restored and I didn’t want not ever to see again the early evening light painting the upper branches of the walnut tree pink and gold or the white roses at evening coming towards me out of their arch as the greens of the garden merged into two dimensions; I wanted to finish my current book; I had many friends I wanted to connect with again.

If he had asked me on the Sunday I would not have spared a thought for the walnut tree, roses, book, friends. Nothing mattered and I could have quite willingly slipped into death. 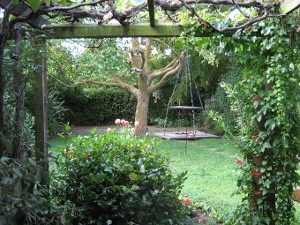 I find this astonishingly comforting. When I get pneumonia and I say when, not if, advisedly, given how the compression is restricting my breathing, then the M.S. will reduce me to such a state of nothingness that I will not mind the dying. I will not be dying with a great urge left towards life. I am immensely reassured."

Question 6: What has been the worst symptom you have ever had to deal with?

Answer: "…...last year it was discovered that my spine had become so compressed that it had developed a fracture. For several months the doctor and I experimented with medication but nothing seemed to reduce the resulting spasms.

The nervous system seems to be a circle and if you introduce an anti-spasm or anti-epileptic drug, it doesn’t eject the problem, it merely shunts it round a bit, so that instead of 2-3 spasms within 30 minutes, with 20 minutes of relative comfort, I was sitting on the brink of a spasm of the full 30 minutes, which when it came, was enormous. For the first few months all that was left of me was pain, grief and helplessness and only very gradually creativity stirred within me like an occasional bubble rising to the surface of my mind....

...Then for some weeks, my mind was taken over by a blankness and emptiness. A friend tried to reassure me that was a significant spiritual state, but I was wasn’t fooled.

Emptiness, an attenuated self; that’s how it was for several months. My sense of self had almost disappeared and there was only emptiness.

Emptiness had filled me. That sounds logical enough, but a self is defined against another self, emptiness, like nothingness, is without boundaries.

This works only if seen as a metaphor. It was if the boundaries of selfwere being eliminated;as if I were crossing a threshold.

This is the language of mysticism, reminiscent of The cloud of unknowing, where the image of God is without form, without co-ordinates of space and time, and must be defined by negatives such as not here, not there, not up, not down. This absence of God becomes a presence to be welcomed with wondering love, not as was happening to mere coiled from, resisted.

The emptiness that assailed me was not of my choosing; defined by negatives, even the word ‘engulfed’ implies location, movement and belongs to the self, not to emptiness. Without form and void, there was no glimmer of light heralding the approaching Spirit. This was not divine nor demonic, just incurably wrong. A drawn out hypnagogic image of a fractured spine, a fracture that will go with me into the grave.

Once the poem had written itself, I understood what was the matter. I often find I only understand what is going on when I have read the poem. The emptiness was not a state of being emptied out waiting to be filled with the light of God, it was my body’s way of processing how it interpreted the fracture.

Once I understood, my creativity was released and I could write again. The burden of grief and desolation had been lightened."

Question 7: How has the internet made a difference in the way you live with MS?

Answer: "I’m 70 and came late and cautiously to the Internet but am beginning to get the idea."

"Texting and emailing seem really amazing to an old woman who comes from the days of surface mail or air letters that took 5 to 7 days to travel from Christchurch to London. I can really appreciate the instantaneousness of them.

But although I have a blog, I confess myself puzzled. I feel I am writing a message and enclosing it in bottle, tossing it into the ocean without checking tides and currents. I have no idea what the destination is, or even if there is a destination. If I walk pass the same piece of shore three weeks later and discover my bottle, I do not know if the bottle has been opened and the message assimilated."

We thank you so much, Diana, for allowing us to share your words with our visitors. We know that your blog, poetry, and book will be an invaluable resource to anyone who reads them, especially our visitors.

If you are just getting to know Diana Neutze, or have met her before, please join me in thanking her for allowing us to take a peek into her journey through life with MS by adding your comments and thoughts in the form below.

Diana Neutze's last post before her death in April of 2013

Go from Diana Neutze Part 2 back to Part 1.