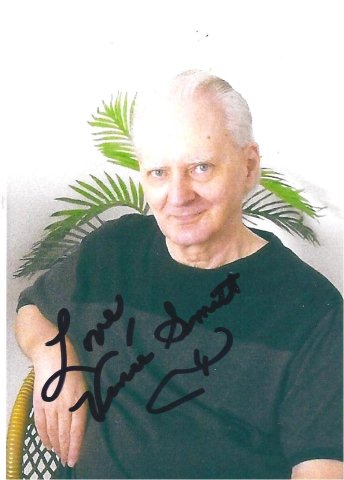 Vince J Smith, a country singer-songwriter, is probably best associated with his long time friend, Annette Funicello. As a tribute to her, he wrote “My Annette”, which became a hit song then and is still loved by many today. There are two versions – the original and the remake, which has more of a country sound.

Vince, born March 20, 1943, began his recording career at the age of 41, along with his brother, Rick, in 1984. They recorded in the same studio where Elvis Presley got his start, the old Sun Records Studio, then known as the Sam Phillips Recording Studio in Memphis, Tennesee. They had several hit songs, one “I Don't Want to Be Alone”, was written by Rick, as well as another called, “Old Country Love Song”.

The same year marks the beginning of his battle with multiple sclerosis as well, although he wasn't diagnosed with it until later. He is doing well, and the MS is controlled, most likely thanks to his wonderful wife, Lorraine, and the music that has been such an integral part of his life.

He has many other hit songs, a few of them are:

After signing with Hearttake Song Records in Nashville, TN., he met Carol Redo, who was one of his backup singers, before he asked her to become his partner. Their voices blended so well together and they recorded several songs which also became hits.

The following are songs which he recorded with Carol that became hits:

As you know, when you have MS, each day can be a challenge. However, Vince has continued to share his wonderful songs whenever he is able. He maintains several sites and stays in touch with fans and visitors, by answering mail, emails, and comments. (These links will open a new window).

Read Comments By Other Visitors Here

Click below to see comments by other visitors about this page...

New Single Not rated yet
My new single is "Statue Of A Fool". Vince Smith Reply: That's great, Vince! Thanks so much for letting our visitors know. I am sure they will …

Downloading Songs Not rated yet
Hi! Fans, when you download any of my songs, all proceeds go to Life in spite of MS. Thanks alot for being a fan, I sure do appreciate it. Vince …

Near You Not rated yet
My new single is finished, when you purchase it the money goes to Life In Spite Of Ms.

New CD Not rated yet
I'm country singer Vince Smith. Watch for my MS commercial soon. My new cd is out. Vince Smiths Greatest Hits. Love you all, thanks for buying my CDs …

Write on Vince Not rated yet
I can't wait to read your book! I have been a Fan of yours for years and Annette was my inspiration too. I met her at Disneyland when I had just been …

Head back to Famous People with MS.