If you've reached Depression 2 and would like to read part 1 first, go here.

The causes of depression in MS patients can actually be due to neurological changes in the brain. Because of demyelination, it's almost a given that there may be some damage to areas which control the emotional center. Behavioral changes can result, one of which can be depression.

Depression is also a side effect of some MS medications. The interferons in particular are known to cause depression in some people. Cir took Betaseron for a short while. I noticed a difference in his mood when he was taking it.

Down in the dumps

He's usually pretty up beat, although he can be a bit of a pessimist. (He says he's just being realistic – hmmm.) To me he seemed to be down in the dumps more often than not. When he realized that he was feeling this way, he told his doctor that he wanted to stop taking Betaseron. 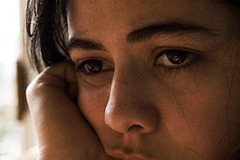 Being “down in the dumps” is not a good feeling to wake up to everyday. You don't even feel like getting out of bed. What's the use? You already have to deal with a chronic illness. Why should you have to get up and “be nice” when you don't feel well.

Medication that increases your chances of having clinical depression is something you should discuss with your doctor. He will probably have warned you of the side effects when he suggested the medication.

To lessen the side effects, your doctor can modify the dosage. If the side effects don't go away or get better, another option is to use another medication to deal with it. Or you may just have to change the MS medication.

One time when Cir was dealing with depression, his doctor prescribed Wellbutrin. (He wasn't taking an interferon at the time.) Cir only took the medication for a short while, though. One of the side effects, a loss of interest in sex, was not acceptable to him. We are still sexually active, so that just didn't work for him.

Coping with MS and depression


If your MS gets worse or you become more disabled, you are also at an increased risk of developing depression. I can't stress enough the importance of talking to your doctor if you feel you are at risk. Talking to a friend or loved one is okay, but it may not be enough.

Clinical depression is a treatable condition. Untreated, it can lead to thoughts of death or suicide. Everyone can have feelings of depression at some point in their lives. But please know that severe depression is not something you have to live with or should live with.

It doesn't matter the cause, whether it's medicine, or a direct result of MS. It is treatable.


If you would like to go from Depression 2 back to the first page on depression, click here.

Go from Multiple Sclerosis and Depression 2 to MS Symptoms.